What do Brussels, Berlin and Cambridge have in common, aside from hordes of tourists? They are all building city-scale doughnuts!

On November 25th, the Kate Raworth-led Doughnut Economics Actions Lab (DEAL) hosted its first webinar for Doughnut Economy enthusiasts, focussing on early-stage activities in the three cities which are downsizing the Doughnut to city level. Watch the webinar recording on YouTube here. Cambridge’s CamDEAG team were delighted and proud to be amongst the cities who presented.

If you’re new to Doughnut Economics, head over to our homepage for a quick introduction, along with links to more resources.

The recipes were for Doughnuts of very different sizes, ranging from the Berlin Biggie of nearly 4 million people, to the medium-sized Brussels Region of just over 1 million, down to the more modest Cambridge Cutie, weighing in at about 125,000 people. That’s a span of 30 times in size, though with remarkably similar ingredients.

OK, enough of the overstretched food references, let’s get down to details.

Each of the cities were reporting the very early stages of implementing the Doughnut, where teams, alliances, working tools, and methods are just starting to form. It’s worth noting that, for each of them, most of the work so far has been under the restrictions and stresses of COVID, but that only seems to have heightened the participants’ determination!

The three cities reported different mixes of originators for their initiatives. In Brussels, it was started at local government level; in Cambridge, the initiative has been grassroot community led, and Berlin struck a chord somewhere in between. But, whatever the origins, each team has quickly sought to form a working partnership between local government and community enthusiasts of the Doughnut. And then beyond this to other local actors, such as existing community groups with similar objectives.

So, collaboration is a key aspect of embedding and enacting Doughnut thinking within a community, however small or large. Of course, it has to be: Doughnut thinking reaches into every aspect of the way the fabric of society is constructed, including the drivers of its economy, its social structures, and its ecological footprint. Changes to all of these have to be a team effort from everyone in the society: so early-stage Doughnut activities need to embrace this and start by at least teaming up with everyone who shares somewhat similar views at the outset.

Also, true to the social equality and inclusivity principles of the Doughnut, each group aims to reach out to members of the local community at the “sharp end of inequality”: to seek input on the specific local issues and, in time, to involve them centrally in co-creating solutions that can be truly tuned for and accepted by the community and thus become sustainable in the long term. Currently, under the constraints of COVID, this step is going slowly.

In each city, the Doughnut’s role is as a source of both authority and inspiration, “a framework and a compass” as the Brussels team put it. The Doughnut’s holistic picture of sustainability and its systems-driven thinking give it authority. And its simple yet powerful visual representation of the living space, between the social floor and the ecological ceiling, make it inspiring in the hands of passionate communicators like Kate Raworth… and indeed CamDEAG’s very own Katie Thornburrow and Clara Todd.

Zooming in one level, each of the three teams have so far used slightly different ways of framing up the city-level picture for themselves. Cambridge is using the four-lenses framework described in DEAL’s city-level methodology guide: https://www.kateraworth.com/2020/07/16/so-you-want-to-create-a-city-doughnut/

Brussels is formulating a more continuous 360-degree version of the four lenses, where the boundaries are blurred or non-existent. Team Berlin gave a diagrammatical representation of an Economy-Ecology-Equity triangle which is divided down into triangles, and again, and so on in a fractal way. It will be interesting to see in time which way of looking at it is best to work with, and it’s great to see the creative ways in which people are creating their own visual /mental representations of the challenges!

Common themes among the presentations, and the questions from the audience, were some dilemmas to be resolved, such as:

Interestingly, Kate Raworth noted on the last point that corporate co-opting and greenwashing with the Doughnut is her biggest concern, and that DEAL will be soon publishing standards by which companies can be counted in or out. Watch out for these in December!

So which Doughnut took the cake, so to speak? If I’m allowed a personal favourite, it would have to be the beautifully simple hand-illustrated drawings of Councillor Katie Thornburrow’s Doughnut journey and the Cambridge Doughnut City portrait. Yes, I know I’m biased!

Are you interested in building a Doughnut economy in your city? Or are you based in or work in Cambridge and would like to join us? Sign up to know more here. 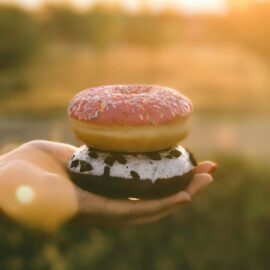