Q1: How would a Doughnut Economy look different to the one we have today?

A Doughnut economy is one that meets the needs of all people within the means of the planet. To do this means transforming two fundamental dynamics. First, turning today’s degenerative industries, that consume and pollute the living world, into regenerative industries that work with and within the cycles of the living world, and that turn the waste from one process into food for the next. Secondly, it means turning today’s divisive economic structures, that tend to concentrate wealth and opportunity in a few hands, into distributive structures that share value far more equitably with all who co-create it. What this looks and feels like to live in as a country, a city, a street – that’s all up for inventing.

Q2: After your book was published in 2017, have any national governments taken interest?

When I wrote Doughnut Economics (DE) I intentionally didn’t try to appeal to current governments because I knew that would make me come up with incremental, doable-today ideas, and there are plenty of those already out there. So I took the long view and wrote for the 21st century perspective. What amazed me, then, was the number of governments – both political parties and civil service administrations, getting in touch and wanting to talk, from New Zealand to the Netherlands. Within the UK, DE has gained interest across the political spectrum, with senior politicians in the Green Party, Lib Dems, Labour and Conservatives citing it and engaging with it. This is obviously important because the vision of a Doughnut Economy should be a shared vision for humanity. Different parties may come with different ideas about how to get there, and that’s all up for debate, but if meeting the needs of all within the means of the planet starts to become a commonly understood goal, then we are starting to shift the paradigm of what human prosperity looks like.

Q3: What does it mean to ‘downscale’ the doughnut?

The Doughnut concept was created for the global scale: the image depicts all of humanity together with Earth’s life-supporting systems. But much policymaking happens nationally or locally so there’s a clear value in translating the concept at different scales – and over the past year we have developed an approach that we are really excited about and believe it can be adapted to many scales – from the neighbourhood to the nation – and for many different contexts, global North and global South. For a city like Cambridge, we invite you to ask yourselves this question:

How can Cambridge be
a home to thriving people,
within a thriving natural habitat
while respecting the wellbeing of all people
and the health of the whole planet?

Answering this question – which combines local aspirations with global responsibility – will take you on the journey of downscaling the Doughnut and using it as a tool to deepen the transformations already underway in Cambridge.

Q4: Following your work with Amsterdam, Philadelphia and Portland, which other cities have shown interest?

Amsterdam published their city portrait in April 2020, at the height of that city’s own covid crisis. Yet it was also a moment at which they, like many other places, were starting to ask: as we emerge from this emergency, what kind of city do we want to become? And many other cities were inspired by their lead: we received over 500 messages of interest within weeks, from all over the world. Right now we know of initiatives to downscale the Doughnut from countries like Costa Rica and Curacao to cities like Berlin, Brussels and Cambridge (of course) to districts and towns and neighbourhoods. We invite everyone interested to become a member of the community at Doughnut Economics Action Lab where you will be able to read stories from all these initiatives and draw on them for inspiration.

Q5: Cambridge DEAG would like to see the City Portrait developed into a digital interactive. What value do you think this will add?

The global Doughnut has already been downscaled and turned into a digital interactive tool by a brilliant team of researchers at Leeds University.

So yes, there’s huge potential of turning the City Portrait into a digital interactive tool – that’s been in our dreams too. We decided that, instead of waiting till we had developed online tools, we would just go ahead with Amsterdam and publish Doughnut City Portrait 1.0 – and open it up to the global community to see how it evolves and what features people most want to add. So if DEAG Cambridge are up for creating digital tools, that’s great. It will make the city portrait online and explorable – I can see it sparking lots of school projects and that’s a great way to widen engagement and creativity. It also means you can keep updating it as new data / stories / images come available. And you’ll be able to share it with other cities that no doubt would love to use it too.

Q6: We are inviting those who work, study or live in Cambridge to build the City Portrait with us. Once we have a better understanding of where urgent action is needed, what advice do you have to turn our vision of a doughnut economy into transformative action?

It’s fantastic that you are taking an open and participatory approach to creating the Cambridge Doughnut – that’s exactly the spirit of working that Doughnut Economics Action Lab promotes, and the process of creating it will itself be a transformatory journey. In terms of how to get into action, I recommend you check out the work of the Amsterdam Doughnut Coalition – a group of city-based changemakers, from social enterprise, business, NGOs, neighbourhoods, academia – who are putting it into practice in myriad ways there. The beauty of the Doughnut Economics community is that one changemaker inspires the next. So we really look forward to seeing what you create in Cambridge because the ripples will go far and wide!

Q1: When did you first hear about Doughnut Economics?

It was in 2017, when Kate’s book came out. But then I didn’t think much about it until the inspirational Amsterdam City Doughnut was launched in May this year. At that point I realised that this model could help me think through some of the problems I was facing as I tried to connect our planning priorities as a Labour council with the UN sustainable development goals, which I believe are of fundamental importance.

Q2: Why is this initiative important?

Firstly, it’s a really strong and simple visual tool that leads to an understanding that our impact on the world can’t be measured just by assessing its carbon footprint.  Doing that avoids considering the social or global impact of our choices. These tools can be used to understand where we are now and how we can make real changes.

Secondly, these tools can enable us to get on with this assessment of our social, environmental, local and global impact, and then use them to take actions to live with more care for people and nature.

In this world of so much stress, and negativity it is a bright light of hope.

In normal times there might be more support, but much energy is focused on keeping residents, workers, and visitors safe. But there is a commitment to work with CamDEAG as a strategic partner once the pandemic pressure eases.  The officers and councillors have already met several times with CamDAEG members and have asked to be kept informed about the group.

Q4: There are plans to develop the City Portrait into a digital interactive. What value do you think this will add?

It will be enormously important. If we can find a way to model the aspects of the City that we want to influence, and make effective use of all the many sources of data, including open data, then we can act more confidently, assess how well we are doing, and begin to understand the complex dynamic that connects our policy goals to their environmental impact.  We can only do this by taking advantage of the digital tools that are now available.  Of course we also need to recognise that data will only be one aspect, albeit an important one, of the way forward. That’s why the Cambridge Doughnut group will listen to people, amplify their voices, help them tell their stories in the ways they choose, and embed these stories in the Digital Doughnut. By bringing these elements together we can achieve a real impact.

Q5: How will Cambridge City Council show leadership in realising a Doughnut Economy?

We don’t know yet. The exciting thing is that we don’t need to wait for the council to lead – the people in neighbourhoods and wards and community groups can use the tools to help themselves today, and the council can learn and adapt and decide how to apply it in our areas of competence.   I will work to integrate the approach into the next Local Plan, and that will give us a large scale example, but the smaller scale initiatives are just as important and transformative.   As a council we need to incorporate the data, the models, and the resulting changes, into our thinking.  If there’s leadership it will come from endorsing the model, applying it ourselves, and – I hope – sharing our growing expertise. 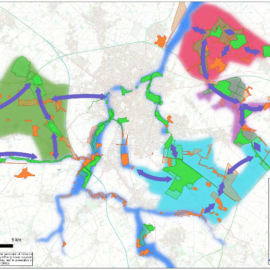 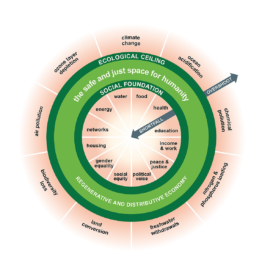 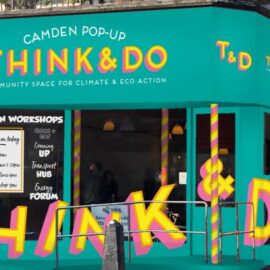